After a bunch of research I chose the Australian Safari Snorkel product based upon a few considerations important to me.

I found the directions worked exactly as written. A genuine pleasure for sure. No guessing. Follow the instructions, use the enclosed template. Worst case scenario I figured was a trip to the body shop to fix my mistakes and start over. Wasn't necessary. Everything worked.

The instructions required me to cut a 4.5" hole in the quarter panel for the ventilation tube, as well as, smaller holes for the mounts points. Not being an experienced body shop guy, I did a bunch of research on the drill bit necessary to cut through the quarter panel with precision, while minimizing what I speculated was a high probability of "jumping out of my hand" due to the 4.5" cut size.

I ended up purchasing a Lenox from Lowe's for the 4.5" hole cut saw, as well as, an Irwin step drill for the smaller mount holes. I used a Makita Hammer Drill in drill mode for the 4.5" cut and a normal drill for the others. A friend of mine was going to video the large cut, particularly hoping to video the jump so we could both laugh, cry and puke if it happened; however, the blade cut through the quarter panel so fast his camera hadn't even focused for a snapshot. We were both surprised. The step drill however, expectedly, took longer because I was over-cautious about drilling too big a hole and messing up the whole effort in a single mistake. Messing up due to naivete is one thing; messing up because I was careless is another. Experienced body shop people likely do this stuff in their sleep.

Very important in every one of the hole cuts was drilling in initial pilot hole first. After that the step drill and the mandrel both had a safe place from which to start doing the deed and kept the bits/blades from jumping. Because the front quarter panel changes angles due to the wheel well flare-out, the 4.5" saw didn't mount flush to the truck when I began the cut, so care had to be taken to manage positioning as the entire saw finally dug in and finished the job.

Because I knew that the snorkel would come back off later to do body work, I did not put the wheel well cover back in, nor did I waterproof any of the tubing connections as recommended. After the body work, then the waterproofing. In order to mount the new rubber connector from snorkel to air filter box, we simply greased the inside of the rubber "S" connector to make it slip into place easier. So while you're doing the work, make it permanent if you know you're not going to futz with it again later. In this case, I knew this was the dry mount before the bodywork to be followed up again later for more purposed waterproofing.

Seriously, on this one, the instructions and template worked. Following the directions made this work without a hitch for me. The purchase price for me was around $450 with free shipping from Seven Springs Customs Complete Off-Road. The packaging was great with no issues of travel damage. Go to the manufacturer website, choose your make, model and engine type and make the order. 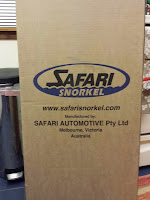 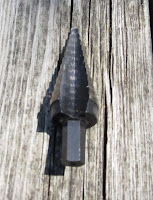 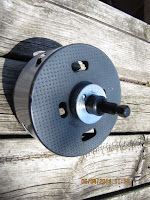 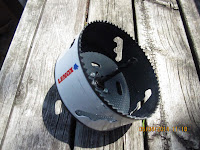 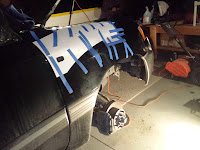 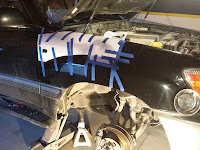 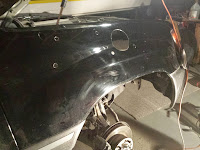 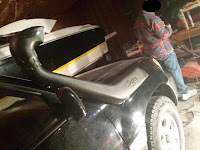 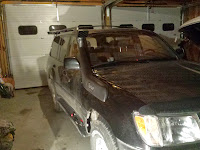 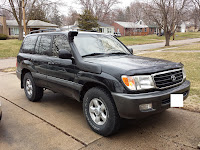